John Basilone (November 4, 1916 – February 19, 1945) was a United States Marine Corps gunnery sergeant who was killed in action during World War II. He received the Medal of Honor for heroism above and beyond the call of duty during the Battle for Henderson Field in the Guadalcanal Campaign, and the Navy Cross posthumously for extraordinary heroism during the Battle of Iwo Jima. He was the only enlisted Marine to receive both of these decorations in World War II.

He enlisted in the Marine Corps on June 3, 1940, after serving three years in the United States Army with duty in the Philippines. He was deployed to Guantánamo Bay, Cuba, and in August 1942, he took part in the invasion of Guadalcanal. In October, he and two other Marines used machine guns to hold off an attack by a far numerically superior Japanese force. In February 1945, he was killed in action on the first day of the invasion of Iwo Jima, after he single-handedly destroyed an enemy blockhouse and led a Marine tank under fire safely through a minefield.

He has received many honors including being the namesake for streets, military locations, and two United States Navy destroyers. 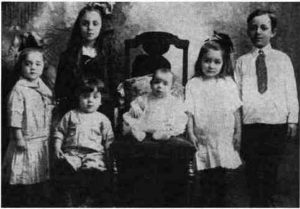 John as a baby in 1917 - seated on the chair - along with his older brothers and sisters. Left to right, Mary, Phyllis Carlo (seated), John in chair, Catherine and Angelo,

Basilone was born in his parents' home on November 4, 1916, in Buffalo, New York. He was the sixth of ten children. His five older siblings were born in Raritan, New Jersey, before the family moved to Buffalo when John was born; they returned to Raritan in 1918.

His father, Salvatore Basilone, emigrated from Colle Sannita, in the province of Benevento, Italy in 1903 and settled in Raritan. Basilone's mother, Dora Bencivenga, was born in 1889 and grew up in Manville, New Jersey, but her parents, Carlo and Catrina, also came from Benevento. Basilone's parents met at a church gathering and married three years later.

Basilone grew up in the nearby Raritan Town (now Borough of Raritan) where he attended St. Bernard Parochial School. After completing middle school at the age of 15, he dropped out prior to attending high school.  Basilone worked as a golf caddy for the local country club before joining the military. 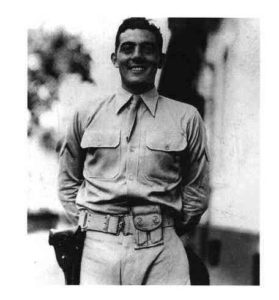 John Basilone in the Philippines during his enlistment in the Army,

Basilone enlisted in the United States Army in July 1934 and completed his three-year enlistment with service in the Philippines, where he was a champion boxer.  In the Army, Basilone was initially assigned to the 16th Infantry at Fort Jay, before being discharged for a day, reenlisting, and being assigned to the 31st Infantry.

After he was released from active duty, Basilone returned home and worked as a truck driver in Reisterstown, Maryland.  After driving trucks for a few years, he wanted to go back to Manila, and believed he could get there faster by serving in the Marines than in the Army. 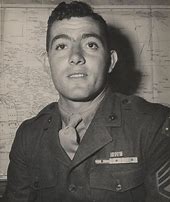 He enlisted in the Marine Corps in 1940, from Baltimore, Maryland. He went to recruit training at Marine Corps Recruit Depot Parris Island, followed by training at Marine Corps Base Quantico and New River. The Marines sent him to Guantánamo Bay, Cuba for his next assignment, and then to Guadalcanal in the Solomon Islands as a member of "D" Company, 1st Battalion, 7th Marines, 1st Marine Division.

In October 1942, during the Battle for Henderson Field, his unit came under attack by a regiment of about 3,000 soldiers from the Japanese Sendai Division. On October 24, Japanese forces began a frontal attack using machine guns, grenades, and mortars against the American heavy machine guns.

Basilone commanded two sections of machine guns that fought for the next two days until only Basilone and two other Marines were left standing.  Basilone moved an extra gun into position and maintained continual fire against the incoming Japanese forces. He then repaired and manned another machine gun, holding the defensive line until replacements arrived.

As the battle went on, ammunition became critically low. Despite their supply lines' having been cut off by enemies in the rear, Basilone fought through hostile ground to resupply his heavy machine gunners with urgently needed ammunition.

When the last of it ran out shortly before dawn on the second day, Basilone, using his pistol and a machete, held off the Japanese soldiers attacking his position. By the end of the engagement, Japanese forces opposite their section of the line had been virtually annihilated. For his actions during the battle, Basilone received the United States military's highest award for valor, the Medal of Honor.

Basilone had a machine gun on the go for three days and nights without sleep, rest, or food. He was in a good emplacement, and causing the Japanese lots of trouble, not only firing his machine gun, but also using his pistol. 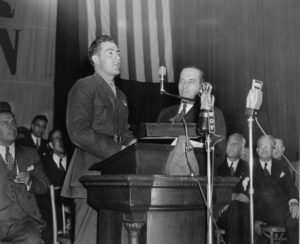 In 1943, Basilone returned to the United States and participated in war bond tours. His arrival was highly publicized, and his hometown held a parade in his honor when he returned. The homecoming parade occurred on Sunday, September 19 and drew a huge crowd with thousands of people, including politicians, celebrities, and the national press. The parade made national news in LIFE magazine and Fox Movietone News.

After the parade, Basilone toured the country raising money for the war effort and achieved celebrity status. Although he appreciated the admiration, he felt out of place and requested to return to the operating forces fighting the war.

The Marine Corps denied his request and told him he was needed more on the home front. He was offered a commission, which he turned down, and was later offered an assignment as an instructor, but refused this as well.

When he requested again to return to the war, the request was approved. He left for Camp Pendleton, California, for training on December 27. On July 3, 1944, he reenlisted in the Marine Corps. 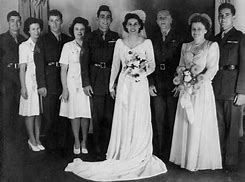 While stationed at Camp Pendleton, Basilone met his future wife, Lena Mae Riggi, who was a Sergeant in the Marine Corps Women's Reserve.  They were married at St. Mary's Star of the Sea Church in Oceanside, California, on July 10, with a reception at the Carlsbad Hotel.  They honeymooned at an onion farm near Portland, Oregon.

After his request to return to the fleet was approved, Basilone was assigned to "C" Company, 1st Battalion, 27th Marine Regiment, 5th Marine Division. On February 19, 1945, the first day of invasion of Iwo Jima, he was serving as a machine gun section leader on Red Beach II. While the Marines landed, the Japanese concentrated their fire at the incoming Marines from heavily fortified blockhouses staged throughout the island. With his unit pinned down, Basilone made his way around the side of the Japanese positions until he was directly on top of the blockhouse. He then attacked with grenades and demolitions, single-handedly destroying the entire strong point and its defending garrison.

He then fought his way toward Airfield Number 1 and aided a Marine tank that was trapped in an enemy mine field under intense mortar and artillery barrages. He guided the heavy vehicle over the hazardous terrain to safety, despite heavy weapons fire from the Japanese. As he moved along the edge of the airfield, he was killed by Japanese mortar shrapnel. 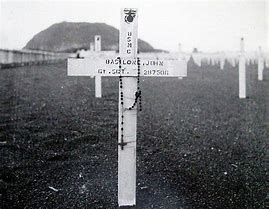 His actions helped Marines penetrate the Japanese defense and get off the landing beach during the critical early stages of the invasion. Basilone was posthumously awarded the Marine Corps' second-highest decoration for valor, the Navy Cross, for extraordinary heroism during the battle of Iwo Jima.

Based on his research for the book and mini-series The Pacific, author Hugh Ambrose suggested that Basilone was not killed by a mortar, but by small arms fire that hit him in the right groin and the neck, and nearly took off his left arm. 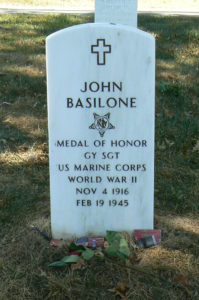 His widow, Lena M. Basilone, died June 11, 1999, aged 86, and is buried at Riverside National Cemetery in Riverside, California. Lena's obituary notes that she never remarried and was buried still wearing her wedding ring.

From Wikipedia, the free encyclopedia